The Upcoming Presidential Election May End All Facebook Political Arguments! 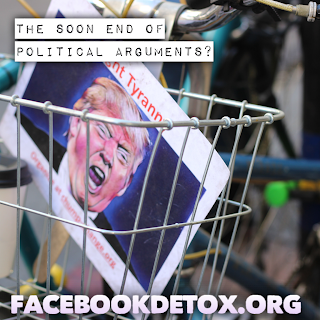 Facebook is about to change in profound ways.  In the next few days, we will see the results of the new big presidential election.  It will be known if Joe Biden or Donald Trump becomes president.  Once this fact is made known, it will usher in a great period of peace and prosperity on Facebook.  All political arguments will cease and the world will return to normal.  Oh, how I await that glorious day!

Facebook users will have cause to celebrate!  All of your political friends will stop obsessing over the election, politics, who said what, or who is the best person to lead the country.  Instead, people will share lovely pictures of their lives, food, and post-pandemic vacation plans.  Are you as excited as I am?

If so, I hate to inform you of the bad news:  It will never end.  This is only the beginning of life as we now know it, where politics is everything and life seems to stop.  It's sad, isn't it?

This is the face of Facebook.  Political central.  Families breaking apart over who they think has their back or their interests at heart.  People love to be recognized for their beliefs, and as we have seen on Facebook when they are not, they get very, very angry!  Perhaps that is why it is worse with families, as they disown each other based on their own political beliefs.  It seems that even differences in religion are more accepted.

But what will they fight about once we find out who wins?  You wonder.  Yes, that's a good question.  There will always be something to argue about, and what better place to argue than Facebook?  Facebook is the perfect place for families to have a showdown and for everyone to be invited to witness the fallout!  The election is happening, and election day is coming fast!  I can't even imagine the chaos that will come out of this year's election!  Imagine when the attention turns from the polls to Facebook itself?  Imagine when families and friends start freaking out based on who wins.

I have a very loud, very obnoxious ex-brother-in-law who LOVES everything about Trump.  The man worships Trump.  He has let his anger boil over when he does not get his own way on anything.  He is the kind who ruthlessly tears his wife apart on Facebook when she doesn't clean the house.  Imagine what he will say if Trump loses?

I have other family members who are extreme Biden supporters, and who have disowned anyone who has voted or would vote for Trump.  They imagine that the world will literally end if their man doesn't win the presidency.  They post multiple posts each day proclaiming the hell that has become of the world as a result of Trump as if they are powerless to live their own lives.  It's all they talk about.  It is their world.

This is Facebook, folks!  I am not alone in this.  One look at the media websites and you see that everything rides on this presidency.  It is as if the whole world is holding its breath, waiting to see what happens next week!  And it only is uglier than ever on (a)social media.

It won't cease to be ugly, either.  In fact, social media has conditioned people to fight and not get along with each other.  If it's not one thing to fight about, it's another.  Fighting and arguing have become the culture--the norm!

Are you on Facebook?  You'd better start muting people ASAP!  You'd better also bide your time and get ready to be inundated with some serious feelings of depression as you see your friends go head to head!  Remember the old man and Facebook, my father-in-law who almost killed himself due to his Facebook obsessiveness?  He's back just in time for the election!  It's not going to be a pretty sight, seeing how many people go literally insane over the next few years as the political heat gets turned up up up!  I honestly picture many people spending the rest of their lives hooked up to the machine of political arguments and angst.  Is this you?

Remember to check out our awesome new book, Facebook Detox!  It's on Amazon now, both in a physical and eBook format!  It's loaded with real-life examples of people fighting Facebook addiction.  Read more about the Old Man and Facebook, the woman who sunk too deep (going insane over comparing likes with others), and the girl who couldn't stand being ignored while she explored the exotic side of the world!  It's also loaded with recent psychological studies!  This book attacks Facebook from every single angle imaginable.  Sounds like a KO!   It may just be the one book that has Mark Zuckerberg shaking in his boots!