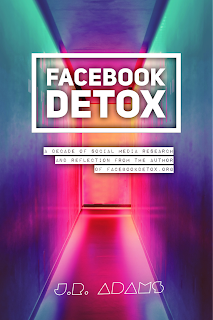 After close to ten years of writing content for FacebookDetox.org and receiving requests to write a book on the subject, I have finally published "Facebook Detox" on Amazon.com.  During my initial research, I found that there were a couple of other books on the pitfalls of social media, but none quite like what I hoped to convey.  This book is not only a critique of social media, but it's a heart-filled, passionate, powerful, no holds barred attack on the negative aspects of social media.

Facebook Detox attacks social media use from a variety of angles, including:

CASE STUDIES
Facebook Detox is jam-packed full of real-life case studies from my own observations, as well as the observations of friends and family members over the years.

Case Study: The Tale of the Sad Traveler

A girl once went traveling to a faraway country in South Asia with her friends. She was excited to be in this exotic country not only because it was a new part of the world full of amazing spices, saris, and beautiful beaches, but because it would be a good time to share her journey to others on Facebook. The trip had begun, and so did the constant barrage of photos from her journey. Sometimes it was the exotic curries, other times it was the cliffs overlooking the Arabian Sea, and then it was the selfies in front of the huge palm trees with the golden sunsets in the background.

At first, the likes rolled in like thunder on Lake Victoria. But, as the journey continued past the airport, baggage check, taxi ride, and first night at the hostel, the likes began to slow down. Now that the girl was out and about posting pictures of the breakfasts, lunches, dinners, peoples, beaches, and everything in between, friends had like-fatigue. The journey had become exhausting. It was as if everyone was seeing more of this South Asian country than the girl who was there.

A few days into the trip, the girl complained to her friends, saying, “nobody is liking my posts.” She looked at her Facebook page once more and saw only three likes had rolled in since she last checked. Maybe it was time for another selfie? Where could she do it? I’ll just do it here, she said, snapping a photo. And up it went. A few hours later the likes trickled in. It’s just not fair, she moaned. Nobody seems to be seeing my posts. Depressed, the girl decided to lap down her lassi and hope that things would pick up. They never really did.

The sad traveler represents someone who found herself in a faraway land of great beauty but instead focused on that which she did not have, which was the fame that such a journey should have brought her on her social media accounts. Even though there were plenty of beautiful beaches all around her, golden sunsets, delicious food, and thousands of reasons to smile, the focus had been on the lack of people who had noticed her “having fun.”

The sad traveler didn’t understand that others had grown tired of her series of posts on Facebook and stopped caring to see her journey. It was the girl who should have been having a good time, not those vicariously watching her travels. Yet, the lack of interaction brought the sad traveler depression when instead she should have felt elated to be in a part of the world that her friends on the other side of Facebook could only dream of. While she felt sadness, her friends were likely feeling intense envy, as they sat huddled in their homes in the cold winter. Some of these individuals were working to barely pay their rent and food expenses, yet they were likely no worse off emotionally than the sad traveler.

Facebook Detox is filled with current psychological and clinical study observations of how social media affects the mind, families, and creates depression, envy, and anger in its users.  Studies on infidelity and relationships are also included in this powerful book that will have Mark Zuckerberg shaking in his boots!

IF THIS BOOK DOESN'T MAKE YOU LOOK AT SOCIAL MEDIA DIFFERENTLY, NOTHING WILL!
Not only does Facebook Detox rip Facebook and social media to shreds, but it also provides the reader with meaningful ways to exit the dark chasms of sites like Facebook and its ilk!
If you are looking for the book that tells it all how it is, without trying to sugarcoat the negative aspects of social media, this is the book!  Order Facebook Detox on Amazon, or read free with kindle unlimited.