Case Study: The Tale of the Angry, Unliked Lady of Facebook 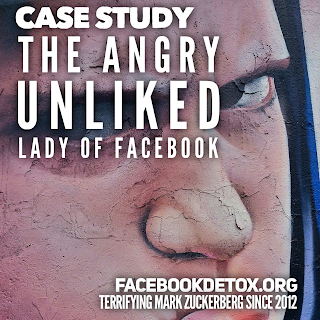 There was once a woman who sat at Facebook in the cool of the afternoon.   She scrolled up and down her wall as if some profound change would sweep her into a land of bliss.  She posted many different posts on a wide variety of topics that suited her passing fancy. She had many friends; many of whom she had never even met. She also had many loves in life, including gardening, interior design, creating art, as well as hanging out at the local bar, and dancing with her friends. She also loved Facebook a bit too much. She would slither into her recliner, plop herself down with a raw carrot and kale salad and whip out her phone. With a fork in one hand and her phone in the other, she would snap a picture, and post the damage on Facebook. “I love being a vegan!” she would proclaim, hoping the world would agree that her being a vegan was the height of human greatness. Then she would sit while waiting for the likes to roll in.

She waited, and waited, and waited some more. She continued to scroll up and down her wall. Yet, looking at her notification icon, she saw that no likes had come in. She was perplexed but decided to make use of the downtime and go to the restroom. Maybe when she reemerged, a like or two would appear. She rushed in and out of the bathroom, not bothering to wash her hands. There were more important matters to attend to. She stammered out to her recliner, sunk in deep while nursing on her red beer. She opened her Facebook app, and to her dismay saw nothing said or given for her labors.

She breathed deeply. Perhaps it was a bad time of day? She put the phone down and closed her eyes for a moment, yet the thought was roaming around inside of her mind. She could not keep her eyes off the phone. She picked it up and took another look. People were commenting on her friend’s posts. Some were even getting likes. That post was written five minutes since mine and it already has seven likes, she thought to herself. And that one has six likes! She reloaded her page. Maybe it was her internet? It wasn’t though. Everything was working fine.

She returned to her account and looked at her post. The picture was sharp. The quote below was attention-grabbing. She even had a couple of vegetable emoticons for extra pizazz. Yet, it sat there unliked. How could this be? This was the second post today that had no likes. They both sat there, back to back, making her look unloved. Surely this could not be a reflection of her as a person, could it? It reminded her of those dark times in her past, when she felt that she was good enough. Not good enough for her family, not good enough for the man she left them for, not good enough for herself. She knew that this wasn’t really the same, but it was eating at her. Reloading the page, she saw that her friend’s post that had previously received seven likes now had ten.

And then she snapped. She pushed aside her salad, slammed down the beer, and scowled. Furiously typing on her phone she wrote: “I post a wide variety of interesting things. I don’t post political junk. I don’t understand why the $%&@ people don’t like my posts. It is time to start cleaning up the fake friends on here who don’t interact with what I have to say!”

The angry unliked lady felt unloved and unappreciated. She wanted the good feeling that likes gave her, but that day she was not getting that kind of positive reinforcement for her posts. Facebook was a way for her to unwind and feel good, but today it wasn’t going to happen. She allowed herself to be too carried away by comparing herself to one of her friends. In the end, seeing her friends getting likes for posts that were posted more recent than her post made her angry. She internalized what she saw as a personal attack instead of realizing that not every post is going to get liked. Yet, that did not matter. It brought her feelings reminiscent of her youth and the things that she would rather forget about.

Everybody hopes to get positive reinforcement for the things that they create. Yet, sometimes we create things in life that we are proud of that do not get any reinforcement from our friends. Those things can range from posting a picture of your healthy dinner to writing a book or graduating with honors from a top tier university. Those accomplishments that you are proud of should satisfy us without being shown off to the world. If we can not enjoy a carrot salad without the world giving it some kind of approval, we have a deeper problem.

Yet, this is a universal phenomenon with those who post on Facebook. People have a way of posting things that will get them a big number of likes. During my own time on Facebook, I could tell when a person was going “fishing for likes.” Some people would throw in a selfie holding an animal high in the air with a quote that screamed, please like this post. These kinds of posts almost guarantee likes, and those who are “Facebook savvy” understand that it is wise to post these kinds of things from time to time if they want to remain relevant. Yet, one could argue that it is pathetic that one has to do this to feel validated.

Research by the University of Queensland School of Psychology found that being ignored on Facebook is maddening (Matyszczyk, C. 2014). The reality is that most people do not sign onto Facebook to see how others are doing. Most people sign in to see if other people have noticed them. When people do not get noticed, it drives them crazy. Nobody likes to talk to themselves, and if nobody ever interacted with you on Facebook, you would likely eventually leave. Yet, if you once had interaction with other people and were then ignored, it would likely drive you mad.

In the first study, one group of Facebook users would just lurk and not post, while the other group could post as they normally did. In the second study, both groups could post as they wished, but the second group didn’t realize that their computers were set up so that they could not get any likes, comments, or other approbation for what they said. The second group felt invisible and ignored. “Once you've taken your place inside the virtual circle, you have to constantly participate, out of fear of being shunned. You have to keep liking your lover's every post. You have to befriend everyone you know and even those you don't. You have to keep your profile active and your numbers up. Otherwise, you're ostracized. And no one likes that” (Matyszczyk, C. (2014).
Labels: addiction Case Studies Facebook addiction Facebook and Family Facebook popularity getting likes Like button