Facebook Will Let Users Turn Off Political Ads, But Why Not Political Posts? 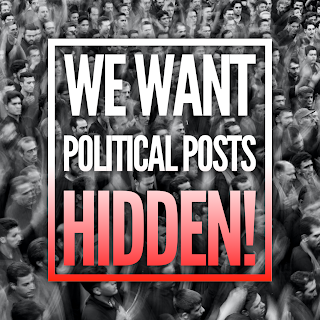 Facebook has recently announced that they will be so kind as to let users turn off political advertisements running up to the 2020 presidential election in the United States.  According to BBC:

Facebook boss Mark Zuckerberg says users will be able to turn off political adverts on the social network in the run-up to the 2020 US election.

“For those of you who’ve already made up your minds and just want the election to be over, we hear you -- so we’re also introducing the ability to turn off seeing political ads,” Mr Zuckerberg wrote.

Facebook and its subsidiary Instagram will give users the option to turn off political adverts when they appear or they can block them using the settings features.

That's great!  Yet, the problem hasn't really been the political ads, which are few and far between, but rather, the people who post the political memes and other nonsense that has flooded Facebook in recent years.  Mark Zuckerburg, why don't you let us turn all of that garbage off?  Why isn't there a feature that allows people to hide anything that is marked as political?

Political memes are everywhere on Facebook, and most of them are maddening, to say the least.  They are calculated to play on people's emotions, oftentimes using logical fallacies.

I have family members on both sides of the political spectrum.  Some would call themselves the "radical left" and others are full Trump supporters.  I could care less about who or what they support, and I don't get political myself.  I tend to think both parties have problems.  Yet, what I tend to care about is the constant barrage of posts that are created to make others angry.  Both sides claim that you should act and make a difference in the world, yet what both sides are busy doing to "change the world" is sharing memes on Facebook.
Mark Zuckerburg and Facebook truly have no desire to give us the option to hide ALL political posts, because political posts have become the bread and butter of Facebook.  For many, logging onto Facebook means a chance to argue about politics and make that "big change in the world."
I have written on here countless times why sharing political memes and posts does nothing at all to change the world.  I have stated again and again how you are merely preaching to yourself and to those who agree with you when you post such garbage, yet for some reason, conventional "wisdom" states that you can indeed change the entire world if you just keep at it.  Yet, all that you are doing is wasting your time and everyone else's who spends their time logged onto Facebook.  Remember that precious in-law I wrote about?  The one who was basically glued to his desk with Facebook opened in the morning, noon, and at night?  The one who left Facebook for a few minutes?  Well, he's back (he never left!).  That's right, he's back in his seat, chugging along daily, with a scowl on his face, complaining about salt on watermelon and other mundane things.  In the words of his wife, "he is alienating his daughter by attacking her hatred of Donald Trump and march to world peace!  Oh, what a waste!
I see posts like the above, in which you are called or known as "the radical left" or a "American conservative" and, really, I couldn't care less.  You've told us 1,000 times already.  We all know.  It's obvious.  I could have told you the political affiliation of any of my friends on Facebook after a week.  You don't need to tattoo it to your skin - it's obvious.  When your life revolves around politics, we understand the side you are on.  We don't need to be told about it twenty times a day!
Why are you on Facebook?  What do you hope to gain from your Facebook use?  Do you think that any of your friends would really miss you if you left the site?  Do you think that you have a real captive audience when you post about your life, last cheeseburger, or where you want to go next Christmas?  Do you?  Do you think that it's a better use of your time than anything else you could do?  Do you think that being on Facebook is helping to change the world?  I guess that's going to be something that you have to think about.  Enjoy!