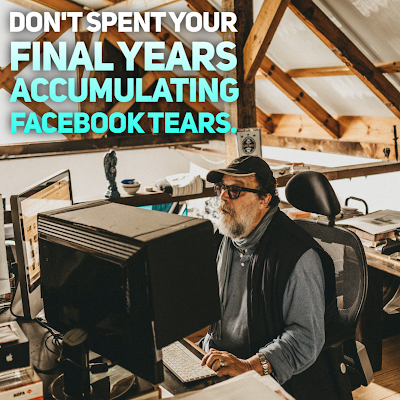 Sometimes I like to go back and read through some of my older posts on this site.  I have been on here for close to a decade, and a lot has happened in my life since then.   When I started this site I was in law school and I imagined that my future would look a lot different than it does today.  I suppose that is how life is (and it makes it more interesting that way).  The world has changed quite a bit since those early days.  When I started this website, I wondered if Facebook would one day wane and fade into obscurity just as MySpace did.  It has not, and I don't think Facebook will go anywhere any time soon.  If anything, Facebook has become the defacto addictive website.  Its claws have sunk deeper into the landscape of the psyche of much of the world.
I keep this blog not because I hate Facebook, but because some people have gotten some value out of my writings over the years.  It also fills a niche that doesn't really exist on the internet.  Many people do not want to talk about the dangers of Facebook, or if they do, they only touch on one angle.  Many of the posts are kind of superficial at best.  Most people seem to say they took a "Facebook detox" of only a couple weeks or a month at most.   Don't get me wrong, it is nice to take a break -- even an hour off of Facebook is a really good start for some people.  But, that doesn't fix the problem.  It's like a band-aid that helps for a while, but the underlying problem still exists.  Just because you forgot your phone when using the bathroom doesn't mean you are making real progress.  Holding your phone on your lap while on the loo and not opening your Facebook app while it screams at you, showing you have three notifications, is more of a feat.  Congratulations if you can do that.  Most can't. 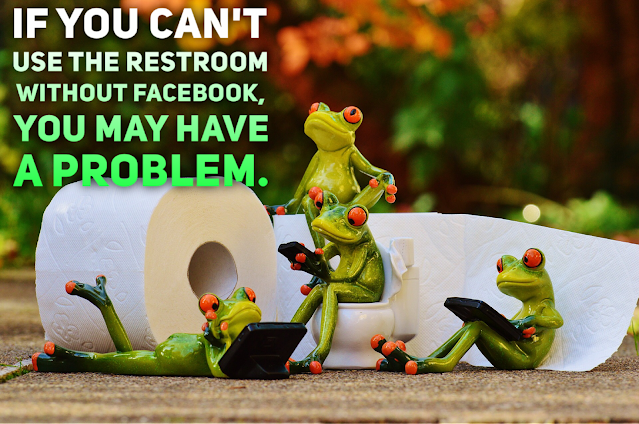 After I returned from a year spent teaching in Egypt last summer, I was "blessed" to spend some time visiting my in-laws.  One of my prominent inlaws, a man who once hated Facebook and stayed far away from it had now had become a third-degree Facebook addict of the highest order.  The man, bless his heart, skipped church more than once to spend his entire day in front of Facebook.  Morning, noon and night he would sit in front of the computer, face basking in the soft glow of the computer screen, reading Facebook, scrolling up and down, reading and rereading as if blinking would cause him miss out on some great event that he would never have a chance to relive.
This may sound like I am exaggerating, but I am not.  Facebook, for this man, altered his way of seeing the world, and as a result, he had become an angry bearish old man who let his mood fluctuate based on what he saw on the site.  Instead of working on the projects that had cluttered in the yard, Facebook became his life, as if it was the beating of his heart, or the blood rushing through his veins.  Every once in awhile, he would read a post out loud and give vocal commentary on it.  During his favorite television shows, he would swivel his chair around and watch, but only momentarily, as the chair swiveled back towards the screen.  He would be back in the world of Facebook before you could say "American Idol".
His demeanor had changed since the last time we visited a year and a half earlier (when he was not much of a Facebook user).  Instead of being somewhat of a joy to hang out (he has always been a difficult man to deal with), he had put on an aura of anger and resentment for almost every facet of life.  He saw himself as an old man who could not do the things he once used to do, and the only thing that could get his mind off aging was keeping up with the world on Facebook.  Yet, he seemed to hate the world more and more as he used it.  He would snap at the posts of others, or type furiously to make his own political points known.  He claimed he hated politics, yet his actions said otherwise.  He claimed he hated Facebook, yet he lived and breathed on the site.  Much of the conversations centered around someone who said something or other on Facebook. 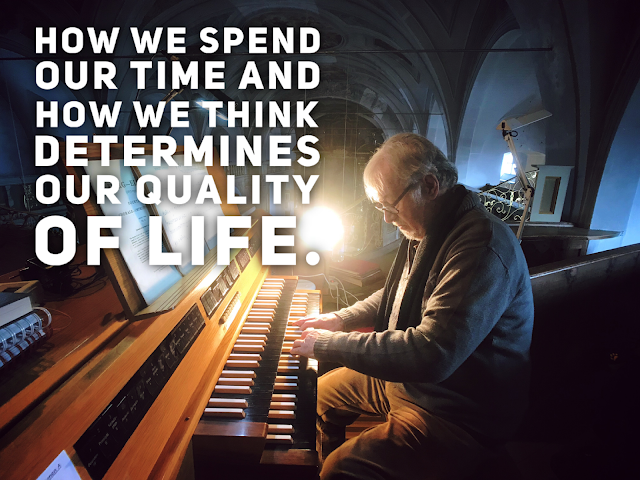 In the morning, when we rose, he was on Facebook.  In the evening, when we parted, he was on Facebook.  As we left for church, if he did not go (he was once a deacon), he was on Facebook.  When the family watched a movie, ate dinner, or played games, he was on Facebook.  It had become his every breath.  With around 100ish friends, I could not help but wonder what was he doing?  What was there to see?  I knew people with ten times the amount of friends who spent less time on the site.  What consumed him so much that his whole life had to be lived upon what was probably the most destructive place in the world for him to spend his time?
If this is the result of aging, then I am terrified to grow older.  Yet, I know that our choices shape who we become in the passage of life.  His choice was to go back and let Facebook literally consume him.  Is there an escape?  Of course.  He could, at any time, wake up from his stupor and say, "enough is ENOUGH!"  Will he?  I don't know.  Sometimes when a person gets used to a subpar life, they settle into it and get comfortable.
The problem is:  THERE IS NOTHING COMFORTABLE ABOUT A PLACE THAT COVERS YOU IN ALL-CONSUMING DEPRESSION.  It would be one thing if Facebook was uplifting and brought him joy.  If he came out with a smile on his face and felt alive, then he would have a reason to be addicted.  Yet, the problem is that Facebook for him, and many others, is the most depressing place on earth.  This man, who sees himself as someone who is slowing down and reaching the climax of his life, spends his waking hours on a site that pushes him to the edge of depression.  And he is not alone.  There are hundreds, thousands, maybe millions of similar stories out there.  People who go on Facebook in the morning, who would have a reason to sing the joys of life, but instead compare themselves to others, see the fighting and discord of life and begin their day in a state of deep depression.  This, to me, was the ABSOLUTE worst thing about Facebook.  On the upside, your posts from the evening before would have maybe been 'liked.'  On the downside, the chance of crippling depression based on news, politics, angry rants, trashy posts, and cruel words is much, much higher than feeling any joy! 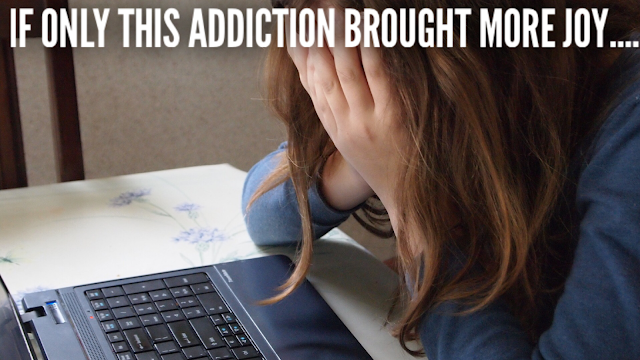 You.  Will.  Be.  Depressed.  If.  You.  Spend.  Your.  Time.  Engaged.  In.  Depressing.  Material.
I have had the joy of traveling to some pretty crazy places.  I have been to about 36 or so countries.  I have seen some nasty things in my life.  I have seen dead people, funeral trains, dying people, divorces, and poverty on a level that most people can't even imagine.  Yet, amongst those things, I have seen people smiling, children laughing, and happiness and a sense of beauty hidden amongst the sadness.  I would never desire to tarry long in some of the places that I have been.  There are some things that I would like to put behind me and forget.  Yet, there is no place that is, overall, depressing as Facebook.  When the funeral trains end, people smile once again.  Amongst the poverty, children still laugh.  People do not (usually) choose to die, or live in slums, but people do choose to spend their lives locked into the world of Facebook, where others crush their spirits with the vilest of posts.   This becomes normal, and people tell themselves that such activity is a good thing!  Why?
I knew that there was a snowball's chance in Hades of my precious in-law leaving Facebook.  Yet, I knew that something needed to be done.  I had noticed that his password was written on a piece of paper next to the computer.  So, during one of the times in which he had left the house, I went into his computer and logged onto his account.  I unfollowed some of the negative political pages he followed.  Instead, I replaced them with more uplifting pages.  I muted (but didn't unfriend) a few of his most negative friends (the ones who only talked politics and conspiracy).  I made sure he saw his more uplifting children's posts first.  I then logged off.  I felt a bit dirty about going into his account, but part of me told myself I could be protecting the man from a third stroke or worse.  Desperate times call for desperate measures.
Later he returned home and logged onto Facebook.  He never noticed the changes that I had made for him, but he began to like and even share some of the positive posts.  He seemed a bit happier.  He was still a bear to deal with, and I was all too ready to leave to my next destination at that point.  But, things were a bit better.  By beholding we become changed.  When we look at negative things all day long, we think in a negative way.  There was no question in my mind that this was happening and had happened over the course of time.
It has now been about six months since I was at his house.  To be honest, I was all too glad to leave.  I could not handle that much longer.  Life is about a heck of a lot more than being in front of a screen reading garbage all day long.  I don't think much of going back, either.  I hope that when I do he is off the site.  I would have loved to unfriend all his friends and deactivate that site, but I knew that would be going too far.  He'd sign back up immediately.  He'd also wonder who or what was on his computer.  You don't get between a bear and his Facebook addiction.   Some things can't be forced, but small unnoticable changes can be made. 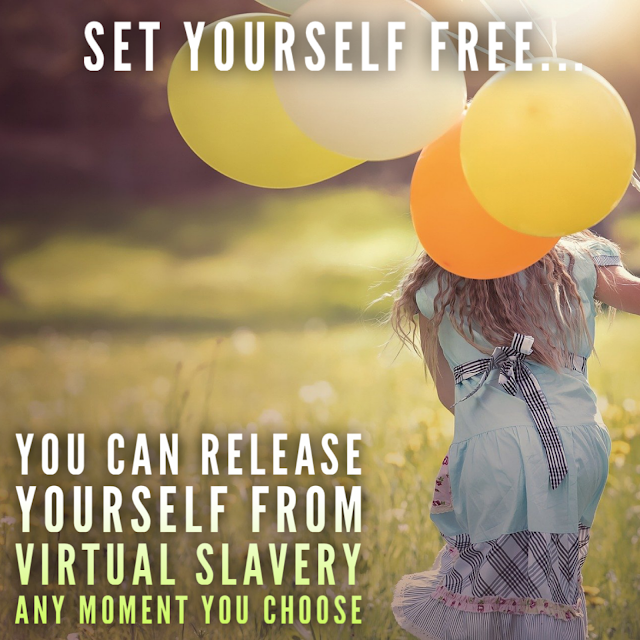 There is no question in my mind that Facebook is the most depressing place on earth.  I have watched families literally fold under the negativity of Facebook.  I have seen people log on with smiles and leave crying.  I have seen many begin their day in a good and jovial mood log off with a scowl and an angry disposition.  Is it worth it?  If you want to be subjected to negativity and feelings of envy for lives that don't even exist or compare yourself and your popularity with others, then by all means, enjoy the prison that you have built for yourself.  Otherwise, log off and deactivate ASAP!
There are much happier places to spend your life.  Don't get locked into Facebook purgatory.
Labels: Depression Facebook and Family Facebook depression Family Getting a family member off Facebook The Bear of Facebook